The Darkest Minds by Alexandra Bracken

Soooo... No excuse... I'm sorry I haven't posted reviews on the last three books I read. I'm terrible... But sorry! 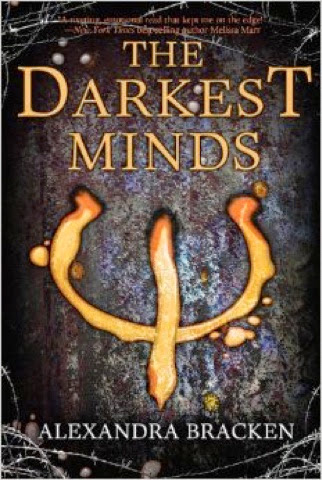 Genre: YA Dystopian
Pages: 488
Type: #1 in The Darkest Minds Trilogy
Rating: 3.5/5 Stars
Synopsis: When Ruby woke up on her tenth birthday, something about her had changed. Something alarming enough to make her parents lock her in the garage and call the police. Something that gets her sent to Thurmond, a brutal government “rehabilitation camp.” She might have survived the mysterious disease that’s killed most of America’s children, but she and the others have emerged with something far worse: frightening abilities they cannot control.
Now sixteen, Ruby is one of the dangerous ones.

When the truth comes out, Ruby barely escapes Thurmond with her life. Now she’s on the run, desperate to find the one safe haven left for kids like her—East River. She joins a group of kids who escaped their own camp. Liam, their brave leader, is falling hard for Ruby. But no matter how much she aches for him, Ruby can’t risk getting close. Not after what happened to her parents.

When they arrive at East River, nothing is as it seems, least of all its mysterious leader. But there are other forces at work, people who will stop at nothing to use Ruby in their fight against the government. Ruby will be faced with a terrible choice, one that may mean giving up her only chance at a life worth living.
Review:
This book was totally over-hyped. To me. I got into the book thinking way too high of it and ended up not being completely satisfied. The book was great, but it would have been much better had people not been raving SO much about it.
The writing, in my opinion, wasn't too unique. Generally dystopians have very unique writing styles; this one, not so much. It was just average to me. Also, atmospheres would suddenly change. From super-sad to super-happy. No buliding up to it, nothing. Just, abruptly. It didn't feel real.
Another thing, I didn't feel emotionally connected to the characters. I didn't feel connected to them at all. It was as if I was watching a badly directed film. People cried in the end apparently. I didn't shed a drop of tear. I didn't even get teary-eyed. Doesn't mean I'm hard-hearted though. Like I said, there was no emotional connection.
I wasn't blown away by the book in the first 200 pages, nor the rest, like my friend had told me I would. Apart from all that, I think the book did a good job. I just wish I'd gone into it without so much expectation. Maybe then, I would have devoured it.
Although, I am interested in knowing what happens since I did enjoy the plot. The book was definitely on the fast-paced side and I loved that about it. If you like dystopian, with a romantic twist to it, definitely check the book out. Just don't go into it expecting too much, and you'll love it!
Posted by Aisha @ InkWellofWords at 4:32 AM