The Duff by Kody Keplinger

Sheesh, guys. I'm SO sorry I didn't do a review in like, ages. Just haven't been in the mood to, with exams and things. But well, better late than never, right? 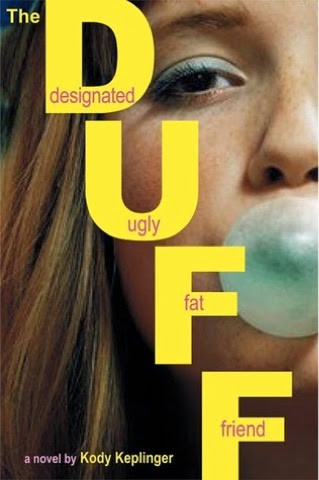 Genre: YA Contemporary Romance
Pages: 280
Type: Standalone
Goodreads Rating: 3.93
Published: 1-Jan-2010
My Rating: 4/5
Synopsis: Seventeen-year-old Bianca Piper is cynical and loyal, and she doesn’t think she’s the prettiest of her friends by a long shot. She’s also way too smart to fall for the charms of man-slut and slimy school hottie Wesley Rush. In fact, Bianca hates him. And when he nicknames her “the Duff,” she throws her Coke in his face.
But things aren’t so great at home right now, and Bianca is desperate for a distraction. She ends up kissing Wesley. Worse, she likes it. Eager for escape, Bianca throws herself into a closeted enemies-with-benefits relationship with him.

Until it all goes horribly awry. It turns out Wesley isn’t such a bad listener, and his life is pretty screwed up, too. Suddenly Bianca realizes with absolute horror that she’s falling for the guy she thought she hated more than anyone.

Review:
First off, what does that cover even mean?! As far as my memory goes, and, since I just finished this book, goes pretty well, there was zero reference to bubblegum. The girl, I get. Bbg, do not understand I.
Anyways, the book itself was quite good. It was your typical NA book without explicit scenes. Except here, we're talking about the female protagonist actually making the first move and using the guy. Plot twist right there. It was a good one, I have to say. The plot was quite interesting and the title of the book really drew me in.
I wanna say the writing style wasn't bad either. It wasn't unique either, though. What honestly made me take down that one star, was the way the book almost seemed to drag at times and, the characters. You see, characters, are the one of the fundamental organs of a book. You need to have good and strong characters since they are the story. It's through them that you get to know a story. It all comes down to them. You have to have strong protagonists in your story. And, I don't think that Biance, the main protagonist is the best. She has had her moments, but they weren't enough to cover her flaws. Don't get me wrong, nobody is flawless. But hers were a bit too annoying at times. She would get worked up over the smallest of things and I just didn't agree to the way she'd keep putting things off. Saying how it's not her place to say anything about it. You know. Running away from things. Uh, they were a bit annoying.
I also felt like we readers didn't get to know too much of Wesly. So that sucked. Cuz you always wanna know your boy. I do think though, that the side characters were really great! I loved them and just... Really liked how the story didn't just focus on Wesly. It integrated family and friends in too, which, to be honest, you don't see around too much.
The whole story, seemed to get a bit boring at times though. Because in more places than one, you'll hear Bianca saying how she can't stop thinking about Wesley and then suddenly thinking how she should be disgusted by him. And I never got why she was so mean to him and hated him so much! He never did anything to her, I believe. Just because he's a player doesn't mean you go all hardcore hate on them when they did no wrong to you!
Overall, I liked the book a lot and can't wait for the movie to come out! If you like YA with a lot of swearing and sass, this book is for you!
Posted by Aisha @ InkWellofWords at 3:01 PM