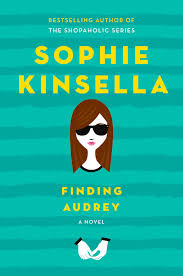 Genre: YA, Contemporary, Romance, Anxiety Disorder, Family
Pages: 288
Type: Standalone
Published: June 2015
My Rating: 3.5
Synopsis: An anxiety disorder disrupts fourteen-year-old Audrey’s daily life. She has been making slow but steady progress with Dr. Sarah, but when Audrey meets Linus, her brother’s gaming teammate, she is energized. She connects with him. Audrey can talk through her fears with Linus in a way she’s never been able to do with anyone before. As their friendship deepens and her recovery gains momentum, a sweet romantic connection develops, one that helps not just Audrey but also her entire family.
My Review:

This was the first ever book I read for my goodreads book club so I think this book will always have a special place in my heart. We read this book for September and I had a lot of fun!

Anyways, for the book itself.

I had a good time reading it. I was fairly unsure about what to expect since Sophie Kinsella has only ever written adult novels. I love those, no doubt, but what about YA? With these thoughts I went in and I have to say I wasn't very disappointed.

Kinsella used the same humor that she has always used. Fun and quirky. I liked the characters that she created since they were all unique in their own way. You can distinguish between them quite easily.

For example, you'd think that two gamers would be pretty much the same character wise. Like, Frank and Linus but no, they were poles apart. They were very different; Frank is kinda harsh while Linus is softer. Frank seems kinda immature but Linus seems very mature.

I did like who Audrey was in the story. She definitely grew a lot in the whole duration of the novel and I really appreciate that. I did think she was kinda annoying at times though. She seemed very selfish but she knew that she was selfish and she tried to correct it and that's awesome. I think that self-realization is very important in a person's growth and it played an overall major role not just in Audrey's life, but in her entire family's.

Now, for the things that I didn't particularly enjoy:

The overall idea that I think radiates from the book is confusion. I don't think Kinsella really knew what she was going to write about. The story was quite poorly developed because while reading I really didn't think that Kinsella knew the back story herself.

It seems like she had a big bomb planned and she was progressing towards it but she didn't really know what the bomb was yet. And then when the time came to reveal the big secret, she just didn't know what could fit and be dramatic enough for the story.

So the ending was obviously very unsatisfying. I was very meh about it.

Apart from this, I also felt that Kinsella really didn't have a lot to add to Audrey's situation so she kept throwing in Frank and the situation he and their mom were in. This topic I'm pretty sure went on for at least a quarter of the book. The story started with Frank and his problem and it ended with Frank to some extent.

It is extremely annoying as I'm here to read about Audrey, not about how Frank's computer is going to be thrown out of the window. Like, I get that he is comic relief, but the situation never really needed all that comic relief.


So yeah, overall, I did enjoy the book but these problems definitely stood out to me. I liked it, but I definitely don't think that this is Kinsella's best work. Read it if you would like a novel that is fluffy, but is potentially a sad story.

Posted by Aisha @ InkWellofWords at 2:24 AM