The Giver by Lois Lowry

Now I know why this book became a movie, and I'm super happy Taylor Swift is in it! 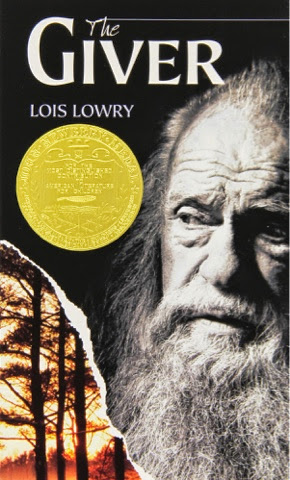 Genre: YA Dystopian
Pages: 224
Type: #1 in The Giver Quartet
Rating: 4.5/5 Stars
Synopsis: It's a perfect world, where everything looks right. But ugly truths lie beneath the surface...
It is the future. There is no war, no hunger, no pain. No one in The Community wants for anything. Everyone is provided for. Each Family Unit is entitled to one female and male child. Each member of The Community has their profession carefully chosen for them by the Committee of Elders, and they never make a mistake.

Jonas, a sensitive twelve-year-old boy, had never thought there was anything wrong with his Community, until one day. From the moment Jonas is selected as the Receiver of Memory at The Ceremony, his life is never the same. Jonas discovers that The Community is not as perfect as it seems. Although they appear to have everything, they are missing something of great importance. It is up to Jonas, with the help of the Giver, to find what long ago had been lost. And so Jonas embarks on an adventure to save the world as he knows it.

Simply and beautifully written, The Giver is sure to touch the heart of every reader. Lois Lowry deals with issues of everyday life that are so often taken for granted. Through the noble character of Jonas, she presents a glimpse of what could be the future. As the tension in the novel mounts, so does the number of questions that Lowry confronts the reader with. The Giver is a book of courage and adventure, and most importantly, one of deep thought. Once readers make contact with Lowry's treasure, they may never see things exactly quite the same. Lowry presents a forceful novel that demands to be heard and philosophically dealt with.
Review:
I finished it in like a day and a half or so and I was really impressed. Mainly because I thought people in the 1990s couldn't picture the future as something so organized and just... freaky and dystopian. I know. Kinda racist.
But not any more!
The world of the future was so fantastically woven together and made, I was surprised! Although I overall loved the book, I don't think I really liked the writing style of the book. Maybe that's just because  I read the book after finishing Daughter of Smoke and Bone. And if you've read it, you know it's got some pretty darn amazing writing in the whole of existence (it's called hyperbole, guys.) So... Yeah. I guess it was because of that since the book was actually meant to be for kids. In what--just saying-- angle does this book seem like it is for children?! I mean, come on, who talks about freaking Stirrings in a children's book? No one. That's who.
Anyways, I'm not degrading the book or anything, just saying what I feel.
I absolutely loved the characters and the Giver, obviously. And there was a little baby, a baby.
Posted by Aisha @ InkWellofWords at 4:17 AM