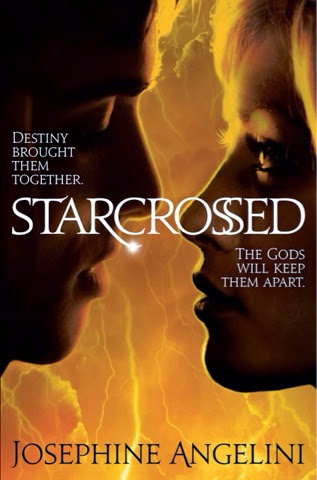 Genre: YA Fantasy Romance
Pages: 500
Type: #1 in Starcrossed Trilogy
Rating: 4/5 stars
Synopsis: Destiny brought them together.
The gods will keep them apart.

When shy, awkward Helen Hamilton meets Lucas Delos for the first time, she thinks two things: the first, that he is the most ridiculously beautiful boy she has seen in her life; the second, that she wants to kill him with her bare hands.
An ancient curse means Lucas and Helen are destined to loathe one another. But sometimes love is stronger than hate, and not even the gods themselves can prevent what will happen next...
REVIEW:
So I've been looking at a bunch of reviews on this book on goodreads. And I don't know how people haven't noticed this flaw. Um, by the beginning of the review, you might have guessed it has something to do with twilight. Um, that's because it's SO similar to Twilight. There's Alice in Twilight, who can look into the future. And there's Cassandra who can look into the future as well. There's Bella, who lives with her Dad alone. And there's Helen who lives alone with her dad. Small towns in both books. Bella later in the series had to learn how to fight. So there was all the practicing. Helen had to learn to fight as well. There was Emmett who loved a good fight. And there's Hector who loves a good fight. WHAT?! Please tell me you didn't notice all this.
Other than the whole Twilight sham, the book was good. I'm not into greek mythology, so it was a bit confusing to start with, but then it got ok to understand.
Posted by Aisha @ InkWellofWords at 4:46 AM