Unravel Me by Tahereh Mafi 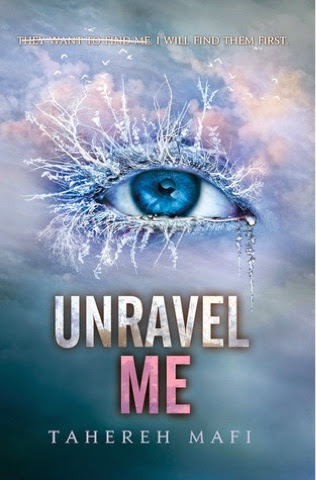 Juliette has escaped to Omega Point. It is a place for people like her—people with gifts—and it is also the headquarters of the rebel resistance.

She's finally free from The Reestablishment, free from their plan to use her as a weapon, and free to love Adam. But Juliette will never be free from her lethal touch.

Or from Warner, who wants Juliette more than she ever thought possible.

In this exhilarating sequel to Shatter Me, Juliette has to make life-changing decisions between what she wants and what she thinks is right. Decisions that might involve choosing between her heart—and Adam's life.
Review:
There are so many thoughts in my head right now. My mind is currently a jumble of Tahereh's good crazy writing. Wow.
Before I get into the review, can I just tell how jealous I am of the kid who'll be Tahereh and Ransom's baby. Like, imagine being the kid of two highly inventive and bestselling authors!
Now. Let's get to the main deal. Let's get to the core of the cake.
Three syllables. Ah-mazing. Fan-freaking-tastic. There was so much that happened in this book! There was so much intensity and if anyone is hesitant to read it, lemme tell you, don't be! You don't know what you're missing on, bro. *whispers* Warner.
Now the book took off pretty much where the first one ended. Which is so relieving for me, because I always hate starting a new book. You just don't get where you are and it's so annoying. Anyway. I was a bit icky to get into the book since the trilogy was losing its shine and all that. I read shatter me a while ago and getting back into the world was a... Challenge of sorts. But I got into the world pretty soon once the initial hesitance wore off. And boy, was I glad.
Things don't go like I expected. Obviously. We understand a lot of back stories, including Kenji's, who turned out to be a pretty important character. He was just this day of light between all this darkness. Loved him. He made my day. He makes me laugh at the most unexpected of times.
That brings me to the characters. Oh my God. The characters. There was a lot of character development from the first book to the second book and then a lot in the entire span of the second book. We see Juliette turning into someone harder and stronger and better. We are introduced to many different characters. New ones, since Omega Point is new to us. It is pretty interesting to see how Tahereh incorporates these characters into the trilogy. Although I did feel like they weren't too big parts of the book. Like they didn't get the attention they should. And oh, I am bolding this (that's not a word, I know) because I want you to know that you HAVE to read Destroy Me, the novella before this book in Warner's POV. Warner! You should read the novella because then you won't really be able to uderstand the depth of Warner's character. So yeah.
I need to do something, and I think this is enough for a review. All I'm going to say is this book is intense and has the most awesomest love triangle ever (not true. Will and Jem and Tessa have that spot, but still) and you just need to read it. But read Shatter Me first. And don't forget the novella. And don't buy the ugly cover with the girl on it. Buy the eye one.
Posted by Aisha @ InkWellofWords at 7:29 AM