Mad about the Hatter by Dakota Chase

Finally! I'm here with a review of Mad about the Hatter by Dakota Chase. Yes! I know! A review! First off, I was given this book for free by Netgalley in exchange for my honest review. 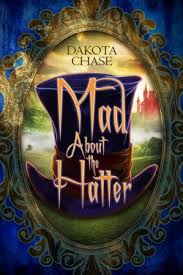 Genre: LGBTQIA, Fantasy, YA
Pages: 237
Type: Standalone
Publication Date: August 20th, 2015
My Rating: 3/5
Synopsis: This isn’t his sister’s Wonderland…. Henry never believed his older sister, Alice’s, fantastic tales about the world down the rabbit hole. When he’s whisked away to the bizarre land, his best chance for escape is to ally himself with the person called the Mad Hatter. Hatter—an odd but strangely attractive fellow—just wants to avoid execution. If that means delivering “Boy Alice” to the Queen of Hearts at her Red Castle, Hatter will do what he has to do to stay alive. It doesn’t matter if Henry and Hatter find each other intolerable. They’re stuck with each other. Along their journey, Henry and Hatter must confront what they’ve always accepted as truth. As dislike grows into tolerance and something like friendship, the young men see the chance for a closer relationship. But Wonderland is a dangerous place, and first they have to get away with their lives.
Review:

I was intrigued by the book in the very beginning. I mean, the cover is gorgeous and the concept was cool; what more did I need?

Turns out I did need more.

This book took off to an amazing start with me. It was wonderful and magical and Hatter was sarcastic and hilarious! Everyone was so interesting because hey, it IS Wonderland! It was most definitely interesting!

While I loved Hatter from the very beginning, I had doubts about Henry, Alice's brother. He just seemed stuck up and not wanting to believe in anything! I mean, I get it. He doesn't know where he is and he's finding that what he thought his sister had been lying about (wonderland) for ages actually is true! But he was so rude about it! He did redeem himself a couple chapters later so all is well there.

Hatter was mad and awesome, though. And THAT reminds me of a song called Mad Hatter by Melanie Martinez. It literally reminds me of this book. The world was very developed and detailed. Everything was extremely vivid. Unfortunately, I felt that the book was too short and descriptions too long. In fact, that was a problem I had with the book. It was very short and there was no wow factor in the story. I felt like everything in the book was like, "Hey, this happened. OK. This happened and then this. Great."

There wasn't any suspense or major twists. It was like a lazy river when it really could've been a wild, untamed sea. I think that if Chase had lengthened the book, we would've enjoyed it much much more.

The ending wasn't very satisfying. There was no intrigue, no 'what if?'. It was all just THERE. No stopping, no puzzles, no gripping my chair. I do think that the ending could've been better.

The book was pretty cool about the whole LGBTQIA element. I expected more from that side, but what I got was pretty negligible. Chase didn't emphasize much on the fact that both her characters are bisexual. Instead, she emphasized on the task at hand. I loved that Wonderland people didn't make a big deal out of Henry and Hatter. I loved their relationship. The romance was slow and steady. In the start, I felt that it was a bit fast. But soon, it was going super slow. And this is a short novel. So that's something to say! The relationship was very realistic.

In the end, I feel that Dakota Chase's strong points are characters, and descriptions. Her weak points are plots, pace, and twists. I think Chase would be able to write much better contemporaries than fantasies.

All in all, I recommend reading but keeping in mind all these things I just talked about. It's worth a read.


Posted by Aisha @ InkWellofWords at 8:53 AM