I changed the name of my blog from Bookish Thoughts, to InkWellofWords! Woo-HOO! 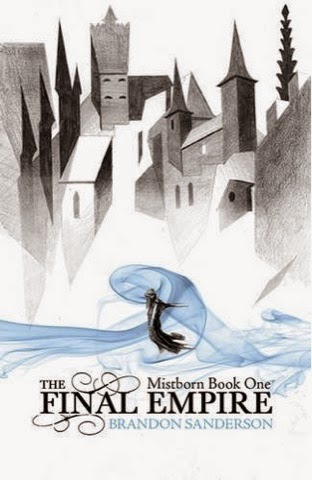 Genre: Epic Fantasy
Pages: 647
Type: #1 in Mistborn Trilogy
My Rating: 5/5
Synopsis: In a world where ash falls from the sky, and mist dominates the night, an evil cloaks the land and stifles all life. The future of the empire rests on the shoulders of a troublemaker and his young apprentice. Together, can they fill the world with colour once more?
In Brandon Sanderson's intriguing tale of love, loss, despair and hope, a new kind of magic enters the stage - Allomancy, a magic of the metals.
Review:
This book was a truly fantastic novel. I've been trying to get into fantasy, especially adult, and this really helped me along the way.
Now the goodreads synopsis is a bit stingy, so I'll explain the rest of the details along the way. 😄
The world itself is very unique. The nature described makes the place seem more like the future, what with ash falling, the sun we know as orangish-yellow being red, blue skies being unknown and black skies being more prominent and brownish plants taking the place of our green ones, and flowers being completely foreign. This screams future, but, the mannerisms maintained and the class division of noblemen and skaa, seems like the olden days.
Skaa are the lower class who are treated like shit and are enslaved. Because their population is larger than that of the noblemen, their respect is even poorer than that of an animal. They are slain heedlessly with no regrets. All in all, they lead miserable lives. Noblemen, on the other hand, are rich and throw balls, and wear suits and gowns and roam around in carriages. They are the ones who beat the skaa.
This world, known as The Final Empire, has been ruled by the Lord Ruler for the past thousand years. They call him a Sliver of God. There have been many failed rebellions over the centuries.
I found all of this extremely interesting. There was a lot of world building along the way, which I lapped up like a cat does milk. We get to see many different places and meet a bunch of different people. I thoroughly enjoyed this aspect. There is definitely a lot of character development as well as the story progress. We see a lot of characters become more mature and solved.
We follow a 16 year old, skaa street urchin, who is called Vin. She is part of a thieving crew, but somehow, she meets a 35-ish man named Kelsier, Survivor of Hathsin, Mistborn. He plans to overthrow the Lord Ruler.
I must now tell you of the magical aspect of the story now. Allomancy. It is a magic of metals. There are eight basic metals, which can be used to create and use different abilities. The catch, though, is that not everyone can do so. The people who can burn all the metals are termed Mistborn. Those who can burn only one are called Misting. And there are those who can't do anything. They are normal, common people.
I definitely found myself intrigued by Allomancy. It was sometimes difficult to follow, but mostly, was easy. I found the characters all different. I was sort of annoyed by Vin, because she was often frustrated and agitated and annoyed. I felt like she just couldn't be happy for sometime. She kind of grew on me though. I loved Kelsier. I found that most of these characters had some amount of depth to them and I really liked that. It made them have so much more to understand and gave the story a new twist.
Speaking of twists, this one seemed hell bent on them. There were all these twists that I just didn't see coming. Or maybe it's just me being ignorant. Eh.
But I honestly think this book is a great start and it didn't even have a death-wanting cliffhanger. So yeah for that! This was a solid beginning to the trilogy. Really excited to read book 2!
Posted by Aisha @ InkWellofWords at 11:12 AM