My first thought at seeing the book... Is Kendare a lady or a man?! Weird thought I know. But then again, I'm the queen of weird thoughts! 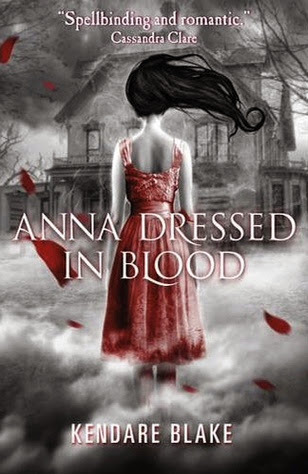 Genre: (According to me) YA Horror
Pages: 316
Type: #1 in Anna Duology... I think.
Rating: 4/5 horrendous stars
Synopsis: Cas Lowood has inherited an unusual vocation: He kills the dead.
So did his father before him, until he was gruesomely murdered by a ghost he sought to kill. Now, armed with his father's mysterious and deadly athame, Cas travels the country with his kitchen-witch mother and their spirit-sniffing cat. They follow legends and local lore, destroy the murderous dead, and keep pesky things like the future and friends at bay.

Searching for a ghost the locals call Anna Dressed in Blood, Cas expects the usual: track, hunt, kill. What he finds instead is a girl entangled in curses and rage, a ghost like he's never faced before. She still wears the dress she wore on the day of her brutal murder in 1958: once white, now stained red and dripping with blood. Since her death, Anna has killed any and every person who has dared to step into the deserted Victorian she used to call home.

Yet she spares Cas's life.
So this book odd nothing for me. As in, all the praise, the hype, said that it's supposed to be so scary you won't be able to sleep. But they were kinda wrong. But maybe not completely. Cuz I haven't slept yet. Cuz I just finished the book and it's still like 6:30 pm here. So yeah. Whatever. But I didn't exactly scream for my mom in the middle of the book or anything.
Anyways, the book was excellent. I loved the entire plot and the whole storytelling of it. I loved the whole ghost busting thing going on. I'm very happy with all the characters and everything. Although I didn't like Carmel right at the beginning. I have to say that there were some things that were kinda unexpected. And now that I look back, I can remember quite some grotesque things.
I took out one star because I didn't like the starting. It was kind of boring for me. The first five chapters. Then it got really interesting. Just like that.
I also don't like guessing things and having it right. Does that make sense? Cuz like I want to be wrong and for something else to happen and give me a shock. Know what I mean? I kinda guessed a main part and I did not like the fact that I was right. But whatever. You don't always get what you want.
I was also not a fan of the ending. Hmm. I wasn't. It was a bad ending. Something like Allegiant. You probably know what I'm talking about. But it was a very good ending morally. Like, if you look from the moral or value of things or of life. It was good ending that way. But certainly if I could change the ending, I would. *sings "I would, I would" from some One Direction song*
That's it. I hope this will make you pick the book up cuz it's a great one. :)
Posted by Aisha @ InkWellofWords at 7:14 AM