I'm SO sorry that this is going up so late!!! I don't even have a good reason! But. Now that this is up, let's not waste time and jump right it! 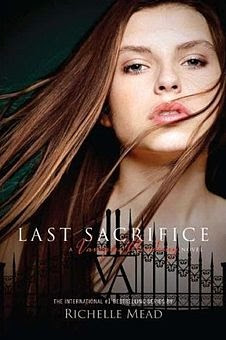 Genre: YA Paranormal Romance
Pages: 594
Type: #6 (and final) in The Vampire Academy Series
Rating: 5/5 Stars!
Synopsis: They come first.
My vision was growing dimmer, the blackness and ghosts closing in. I swore it was like I could hear Robert whispering in my ear: The world of the dead won't give you up a second time. Just before the light completely vanished, I saw Dimitri's face join Lissa's. I wanted to smile. I decided then that if the two people I loved most were safe, I could leave this world.

The dead could finally have me.


Rose Hathaway has always played by her own rules. She broke the law when she ran away from St. Vladimir's Academy with her best friend and last surviving Dragomir princess, Lissa. She broke the law when she fell in love with her gorgeous, off-limits instructor, Dimitri. And she dared to defy Queen Tatiana, leader of the Moroi world, risking her life and reputation to protect generations of dhampir guardians to come.

Now the law has finally caught up with Rose - for a crime she didn't even commit. She's in prison for the highest offense imaginable: the assassination of a monarch. She'll need help from both Dimitri and Adrian to find the one living person who can stall her execution and force the Moroi elite to acknowledge a shocking new candidate for the royal throne: Vasilisa Dragomir.

But the clock on Rose's life is running out. Rose knows in her heart the world of the dead wants her back...and this time she is truly out of second chances. The big question is, when your whole life is about saving others, who will save you?

Join Rose, Dimitri, Adrian, and Lissa in Last Sacrifice, the epic, unforgettable finale to Richelle Mead's international #1 bestselling Vampire Academy series.
Ok. Can the ending of this series be any better?! No. Cuz it's the best! Like, literally! It was that good! I've never laughed out loud, but in Miss Mead's books, oh no, I'll laugh my butt off! The sarcasm is too much!
Anyways, the book was obviously fantastic. It was just... Wow. The suspense, you know. The shock. Like, you don't even recover from one shock and BAM! Another's hit you! It's crazy, you know. The whole plot, the whole... I don't know. It's just that good. I really don't know what to say about it. You can't say anything about it without spoiling someone. And I've already talked about the characters. How much I love them. I'm just gonna stop. I'm just gonna say this: It. Was. Phenomenal.
Now shoo! Go read the book.
Posted by Aisha @ InkWellofWords at 12:44 AM