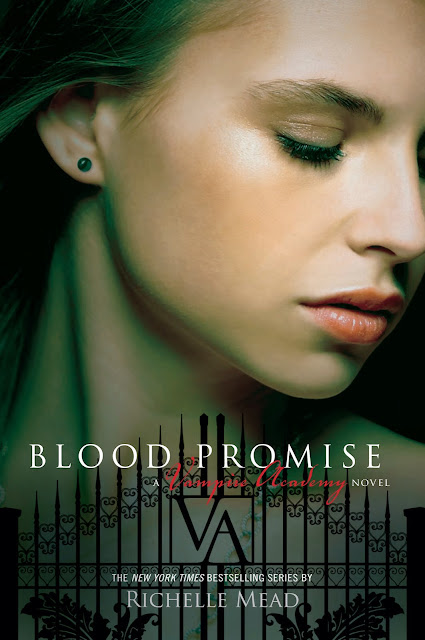 Genre: YA Paranormal Romance
Pages: 503
Type: #4 in The Vampire Academy Series!
Rating: 4/5 stars
Synopsis: Rose Hathaway's life will never be the same.
The recent attack on St. Vladimir's Academy devastated the entire Moroi world. Many are dead. And, for the few victims carried off by Strigoi, their fates are even worse. A rare tattoo now adorns Rose's neck, a mark that says she's killed far too many Strigoi to count. But only one victim matters ... Dimitri Belikov. Rose must now choose one of two very different paths: honoring her life's vow to protect Lissa—her best friend and the last surviving Dragomir princess—or, dropping out of the Academy to strike out on her own and hunt down the man she loves. She'll have to go to the ends of the earth to find Dimitri and keep the promise he begged her to make. But the question is, when the time comes, will he want to be saved?

Now, with everything at stake—and worlds away from St. Vladimir's and her unguarded, vulnerable, and newly rebellious best friend—can Rose find the strength to destroy Dimitri? Or, will she sacrifice herself for a chance at eternal love?
Soooo... I liked the book quite a lot, but it WAS kind of a drag at times. Honestly. Who wants to read a book with barely any of the previous characters surrounding it? So it was a drag at times where I'd just be like "When is Dimitri coming?!" But seriously, he does come.
And it was scary. At least for me. I don't know about you! But I'm feeling 22! Sorry. That was just crazy singing from my part.
So I really didn't like Dimitri much in the book since he was a Strigoi. He just... freaks me out. You don't really know why he wants Rose at all. Why he just doesn't kill her. Whether he still has feelings for her or not. You know? Lots of unanswered questions.
We were introduced to loads of new characters. Most of whom I liked.
Also, my love for Adrian grew in this book. As it happens to always. So yeah.
You should definitely read the book and once you've read it watch my spoiler discussion on BookTube. My channel is called BookishThoughts. So yeah. I say a lot of those.
Posted by Aisha @ InkWellofWords at 5:28 AM