I'm back again! Duh. Before you read, this book is the second in a series and could contain spoilers if you haven't read the first book yet. 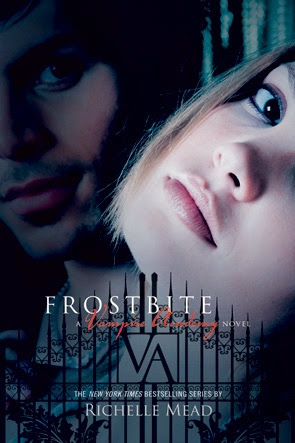 Genre: YA Paranormal Romance
Pages: 327
Type: #2 in The Vampire Academy Series
Rating: 5/5 stars!
Synopsis: Rose loves Dimitri, Dimitri might love Tasha, and Mason would die to be with Rose...
It’s winter break at St. Vladimir’s, but Rose is feeling anything but festive. A massive Strigoi attack has put the school on high alert, and now the Academy’s crawling with Guardians—including Rose’s hard-hitting mother, Janine Hathaway. And if hand-to-hand combat with her mom wasn’t bad enough, Rose’s tutor Dimitri has his eye on someone else, her friend Mason’s got a huge crush on her, and Rose keeps getting stuck in Lissa’s head while she’s making out with her boyfriend, Christian! The Strigoi are closing in, and the Academy’s not taking any risks... This year, St. Vlad’s annual holiday ski trip is mandatory.

But the glittering winter landscape and the posh Idaho resort only create the illusion of safety. When three friends run away in an offensive move against the deadly Strigoi, Rose must join forces with Christian to rescue them. But heroism rarely comes without a price...
This book is amazing because I read it in a school day. Just saying.
It was like, I don't even know what to say about it! It was just sooo good. Mead really knows how to put in everything. This book has got just enough sexual tension to keep a person around. Like, you need to know what's gonna happen. Literally. Which is why I stayed up till 1 reading it.
Rose, was just kickass. She's probably one of my all time favorite characters. Ever. So that's something. I love her whole attitude. You know, not thinking before doing something? I can so relate to that.
I just thought all the characters were amazingly created. Lissa, Mason, Christian, Tasha. All of em. You're probably going like, Aisha, what about Dimitri? Yeah. Him. Dimitri *swoon*. He deserves to be out of the common. He is just, the perfect guy ever. I mean, he has control. But he's also very unpredictable so you don't know what's gonna happen when. Which is where the entire suspense comes from.
Anyways, it was great that Mead decided to add a new character, whom I personally really loved, Adrian Ivashkov. He was just a really entertaining character.
What I did find a bit stupid in the book, was that I could guess a lot of things way before anyone in the book could. If you've read the book, you probably know what I mean. They're simple things to understand. But it "hits them" later on. I found that kind of stupid since half of the things were just plain obvious.
I really don't wanna type anymore. So I'm going to give you guys a rest from this boring review while I give my fingers a rest. ;D
Posted by Aisha @ InkWellofWords at 7:15 AM