Let's take a moment and appreciate Rainbow Rowell for the amazing bundle of papers that she's presented us with. This bundle over which we are now going to Fangirl!
If you still don't get by the above lines, I'll tell you! I loved Fangirl and needless to say I gave it all the stars it deserves. 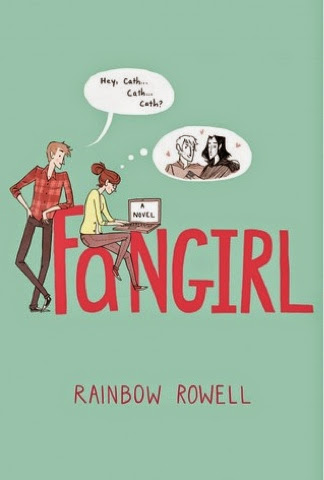 Genre: YA Contemporary Romance
Pages: 445
Type of Book: Standalone
Rating: 10/5 stars! As in, a LOT of stars!
Cath is a Simon Snow fan.

Okay, the whole world is a Simon Snow fan...

But for Cath, being a fan is her life—and she’s really good at it. She and her twin sister, Wren, ensconced themselves in the Simon Snow series when they were just kids; it’s what got them through their mother leaving.

Reading. Rereading. Hanging out in Simon Snow forums, writing Simon Snow fan fiction, dressing up like the characters for every movie premiere.

Cath’s sister has mostly grown away from fandom, but Cath can’t let go. She doesn’t want to.

Now that they’re going to college, Wren has told Cath she doesn’t want to be roommates. Cath is on her own, completely outside of her comfort zone. She’s got a surly roommate with a charming, always-around boyfriend, a fiction-writing professor who thinks fan fiction is the end of the civilized world, a handsome classmate who only wants to talk about words... And she can’t stop worrying about her dad, who’s loving and fragile and has never really been alone.

For Cath, the question is: Can she do this?

Can she make it without Wren holding her hand? Is she ready to start living her own life? Writing her own stories?

And does she even want to move on if it means leaving Simon Snow behind?
Eek! This book was phenomenal! It was really an awesome read. I have no idea why I didn't try harder to get the book before. And then I did. Try hard, I mean. And here I am, writing a review cuz I finished the book. This is my first Rainbow Rowell book, and I have absolutely no regrets. I'm so not turning back from this woman's amazing writing! It has the right blend of everything. Literally. It has a family aspect to it, which is so interesting to read. I'm not much of a "family-reading" person, but I have to admit, I did enjoy reading about Cath's family. It had just the right amount of romance in it, to make it captivating. And who doesn't like a good amount of fangirling?!
The characters in this book were really interesting to me. Generally, I read books where all the guy characters are really hot, with a rockin bod'. And all the girls are the prettiest things you've ever seen. And so, it was refreshing to read about these normal people with normal things going on in their lives. You know, it was nice to know that you're not the only one not the prettiest, that there are people out there who wear glasses. But in their own way, I think Cath and Levi were two of the most prettiest couples I've ever seen.
So, I loved Levi, duh. How can you not love him? He is the most sweetest characters ever. And I would totally date someone like him. I mean, there are such less people who smile as much as he does. Cath was a character I adore as well. I mean, she was ready to literally drop out of college to take care of her dad. And yeah, it wasn't the only reason, but it was a main reason, sort of. I loved how dedicated she was to Simon and Baz. (Do they actually exist?) I loved how she stood up to her mom. And coming to that... I really hated her mom. And when Cath finally met her, I felt such a huge hatred for her not being there for her daughters, I could have hit somebody. Wren. I really didn't like Wren either. At the beginning. She was being so mean to Cath, I really didn't like her. But then, towards the end of the story, when she started becoming nicer, I started liking her.
For some wierd, twisted reason, I really liked Reagan. As much as she was messed up and did drugs, and all that, she was actually being nice to Cath. She actually cared about Cath. And that made me love her. How she took Cath under her wing, and all that nice stuff. It was so nice when she even allowed Cath to date Levi, when it must have really made her feel insecure... I just love her.
Favorite Quotes:
"I really like you, Cather."
"I really like you, too."
“Seriously, why aren’t you on drugs?”
Cath walked past her out of the room. “Are you a licensed psychiatrist? Or do you just play one on TV?”
“I’m on drugs,” Reagan said. “They’re a beautiful thing.”
“Come home with me, Cath. I miss you. And I don’t want to say good night.”
“You know that I’m falling in love with you, right?”
Posted by Aisha @ InkWellofWords at 7:14 PM