Where's my boyfriend list? Yep, Mr. Rule Archer has made it to the boyfriend list! Rule... Wait till I rule over you! Ha! Get it? Rule, rule?! Uh, forget it. 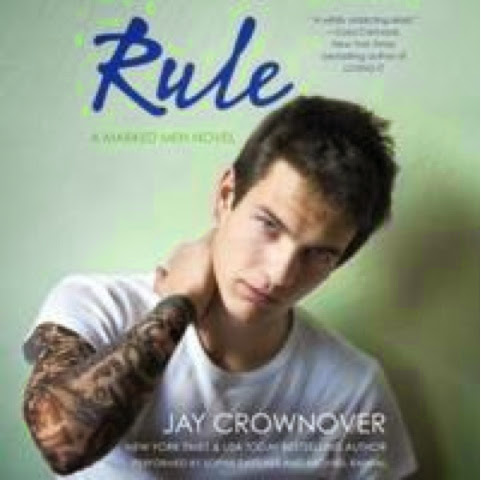 Genre: NA Contemporary Romance
Pages: 327
Type: #1 in The Marked Men Series
Rating: 5 out of 5 fricking stars!
Synopsis: Shaw Landon has been in love with Rule Archer, the badass tattooed boy since she first laid eyes on him. Now she's nearly 20, but Rule's never noticed her. He goes on with his lifestyle of partying, drinking, hooking up and getting up with a major hangover. It breaks Shaw's heart to see this, but she can't really say anything.
Rule Archer is finding himself falling in love with his dead twin's girl. Shaw. After the night that something bizarre happens. He knows that they're miles apart. She's a straight A student with rich parents and everything while he's working at a tattoo parlor. They're poles apart and need to get over a lot of difficulties if they wanna stay together.
I devoured this book. Literally. I'm not even lying. It was so good and just, ugh! Words can't really express how I feel right now. First of all, let me just state this fact for all of you to know. I know the cover's kinda cheesy and boring and looks like it's self-published, but trust me, you'll love the book. After all, don't judge a book by its cover!
This book was very well written. It's been a while since I read a book that actually made my chest squeeze in pain knowing that the characters were in pain. Because, generally there aren't a lot of books out there that are something like that. That actually make your throat choke when you see one of the characters walking away. Also, I thought the book was pretty refreshing. I don't read a lot of books with family a big part if it. But this book had a pretty good part of the family and I really liked that.
Shaw. Shaw's character was really nice. She was sensible and kind and loving and loyal. She was just an altogether really great character. She was pretty put together. The only thing I didn't like about her was how she didn't stand up to her parents earlier on. If you've read the book, you know what I'm talking about.
Rule. He was one of those characters who has a bad boy persona and has a million tattoos and another million piercings, wierd hair and everything, but deep down was a good guy who actually cared. Generally, in a lot of books with bad boys, the guys are always on denial to the fact that they're falling in love. Thankfully, Rule was not that guy. He knew something was happening but what, he didn't know.
Overall, I really enjoyed the book and can't wait to read about the other marked men because I absolutely loved them in this book. Can't wait to see how this series turns out to be!
Quotes:
“a warm hand slid under the heavy fall of my hair to settle on my neck and a deep voice growled in my ear, “How in the fuck did you get in here, Casper?”
“I mean I had kissed hundreds of girls and there was always something nice about it, but Shaw kicked nice to the curb and went right into coma inducing.”
“So Nash and I went out and there were redheads and there were brunettes and there was even a super-hot chick that looked kinda like Pink but you think any of them did it for me?  No, Shaw not one because they weren’t fucking you and ever since you walked out on Sunday all I’ve been thinking of is you.”
“To announce to the world that she was mine.”
“I decided then and there that kissing Shaw was probably as close to heaven as I was ever going to get.”
Aren't those quotes just amaze?! I know!
Posted by Aisha @ InkWellofWords at 6:58 PM